How Are Childhood Trauma and Chronic Illness Connected?

When trauma occurs during childhood, this is often referred to as adverse childhood events or ACEs. An ACE is an experience that negatively affects someone from 0 to 17 years of age. There are too many examples of ACEs to list, but many fall under categories like being abused or witnessing abuse, neglect, or living in a dysfunctional home (domestic violence, substance abuse, etc.). The Centers for Disease Control and Prevention (CDC) estimate that at least 1 in 6 adults have lived through at least four ACEs.

Obviously, such trauma is nightmarish for a child at the moment. However, research strongly suggests that severe emotional stress often translates into physical changes. Thus, ACEs go on to increase a child’s risk of chronic illness as they move into adulthood.

The Connection Between Childhood Trauma and Chronic Illness

According to studies, the more ACEs a child experiences, the greater the risk of them later developing conditions that are among the leading causes of death in adults, e.g. cancer, chronic lung disease, and heart disease. And it’s more than just the top killers. Here are just some of the other issues that are associated with ACEs:

Adding to the risk is the reality that those who have endured trauma tend to lean on unhealthy behaviors like overeating, substance abuse, smoking, and hypersexuality. These counterproductive coping mechanisms frequently lead to other chronic and/or deadly diseases. 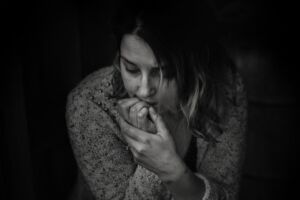 What Happens After an ACE?

You may or may not get a PTSD diagnosis. Either way, the process is similar. When victimized by something like abuse or violence, a child’s brain undergoes changes. In response to a state of emergency, the areas that process emotions, memory, and fear either increase or decrease in size. This changes how the amygdala, hippocampus, and prefrontal cortex function and how they interact with each other.

As a result, the child’s brain will get stuck in a state of high alert. In such a state, the body is flooded with stress hormones and is left more vulnerable to all the conditions listed above. Unless and until the trauma is processed and resolved, this cycle will continue.

As many as 1 in 4 adults with a chronic, life-threatening illness will develop medically induced PTSD. Yes, the sheer stress caused by the intense medical interventions piles more PTSD on top of the lingering trauma from childhood. Those struggling with medically induced PTSD have been found to be less diligent in their health care. They may skip medications and appointments while being resistant to implementing the lifestyle changes suggested by their doctors.

From a holistic perspective, the focus is on stopping ACEs. The CDC estimates that the prevention of ACEs could eliminate:

This would require systemic changes that need outspoken support from all of us.

On a personal level, though, what about all the adults still suffering from what happened to them in childhood? It is vital for such people to seek the help they need. Working with a skilled therapist is a giant first step toward healing. By “healing,” I mean not just getting out from under the oppressive umbrella of PTSD.

When you recover from the lingering impact of ACEs, you are also better positioned to avoid the type of chronic illnesses that can induce more trauma and threaten your life. If you or someone you know is at risk of ACEs or living with the fallout of ACEs, it is absolutely critical that you reach out to a mental health professional as soon as possible. I am here to support you when you are ready for trauma therapy.